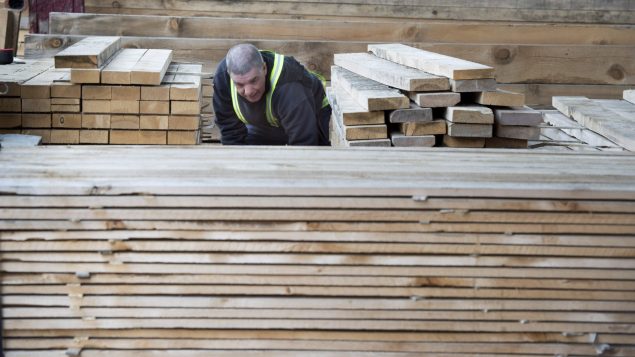 Rising interest and mortgage rates will most likely cause economic activity to slow in 2023, painting a pessimistic picture for North American housing and, consequently, lumber markets over the next year.

Home building, along with mortgage rates and purchasing power, have a direct impact on lumber demand as the majority of North American houses are constructed with wood. A flurry of recent rate hikes will likely cause U.S. housing starts to drop 16 per cent year-over-year in 2023 to 1.3 million before rebounding to 1.55 million in 2024 as the general economy is expected to pick up (Table 1).

The strong fundamentals – record pent-up demand, the large population of adults in prime home-buying years, record home equity, the aging housing stock, and historically low inventories of homes for sale – that contributed to the surge in demand during the pandemic (when rock-bottom interest rates sent homebuyers into a buying frenzy and caused prices to soar) are still simmering below. With these factors underpinning softwood lumber’s main end-use market, housing starts will remain above pre-pandemic levels.

This short-lived downturn in 2023 for all of lumber’s end-use markets, with the exception of industrial production, will probably be followed by a return to market growth in 2024. Residential repair and renovation (R&R), however, is expected to take longer to rebound. To paint a picture, R&R spending rose nearly four per cent in 2021 and an estimated 19 per cent in 2022, and will probably tumble 21 per cent in 2023 (Graph 1). Still, by historical standards, the amount of money that people are expected to spend on residential improvements will remain high. This is because of rising home equity, a lack of new-entry-level and first-move-up homes due to rising unaffordability, and the aging housing stock. On top of this, U.S. homeowners who bought during the pandemic when rates were low are expected to stay in their homes in order to hold onto their low mortgage rates. These factors should cause homeowners to opt to fix up or expand their current homes rather than move and buy more expensive ones. 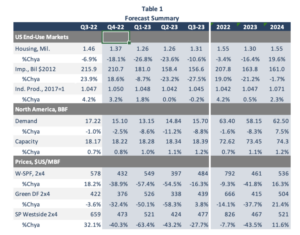 U.S. industrial production, on the other hand, is forecast to dip in the first half of 2023 because of rising interest rates and the slowing U.S. economy, before resuming an upward trajectory. This is because the ISM Purchasing Managers’ Index (a leading indicator for the sector) has shown strength for more than two years, indicating industrial production is likely to continue to grow over the near term. Additionally, inventories of manufactured goods are low and need to be restocked.

Market weakness follows two volatile years. The pandemic spurred governments to drop interest rates, which in turn caused a flurry of home buying and caused lumber prices to skyrocket to record highs as mills struggled to meet demand amid labour shortages and transportation bottlenecks. Lumber prices dropped sharply in 2022 and are expected to fall but remain above historical averages in 2023 due to higher production costs, the need for dealers to rebuild inventories and the expectation for labour and supply constraints to continue to hamper production for the next two years.

The decline in lumber prices is nearing its end. Prices are currently below variable costs in several major producing regions, causing some mills in the west to curtail production even as inventories are near record lows. Lumber prices will continue to move up early in the first quarter of 2023 as dealers take advantage of some of the lowest prices in nearly three years to rebuild their depleted inventories. While prices are expected to move up initially, the downturn in end-use market activity will cause a substantial decline in lumber prices in the second quarter.

The high prices reached during the pandemic led mills to invest in capacity expansions, which are expected to become operational in 2023. This increased supply will more than satisfy weakening markets and keep downward pressure on prices throughout the remainder of the year. Prices, however, are forecast to be extremely volatile through 2024 as the effects of COVID-19 linger and low stocks force dealers to buy just enough wood to meet their immediate needs at higher prices than they want. This will force prices sharply lower in a cycle that will repeat itself over the next year.

Overall demand for softwood lumber in North America will fall 8.3 per cent to a nine-year low in 2023, following a 1.6 per cent drop in 2022, as end-use markets weaken, and a recession remains likely. This will be short-lived, however, with a 7.5 per cent rise forecast in 2024 at 62.5 BBF. North American softwood lumber demand is driven by U.S. consumption. In 2021, as prices soared to record highs, U.S. consumption reached a 15-year high.

U.S. lumber consumption dropped by 0.5 per cent in 2022 and will decrease by another 9.1 per cent in 2023 as end-use market activity deteriorates. This is in response to the U.S. Federal Reserve raising interest rates to slow the overheating economy. Additionally, nonresidential markets are hampered by weak demand for commercial and retail space. However, as those markets improve in 2024, so will U.S. lumber consumption. A growth of of 8.7 per cent over 2023 to 52.14 BBF is expected.

In Canada, year-over-year lumber consumption fell every quarter from the third quarter of 2021 to the second quarter of 2022, as activity started to decline from the strong year-ago levels. Canadian consumption reversed this trend in the third quarter of this year, and we expect yearly growth will continue through the first quarter of 2023. However, as in the U.S., Canadian domestic lumber consumption will dip overall in 2023 due to rising interest rates. Even with the pickup in end-use markets in 2024, Canadian consumption will fall another 0.9 per cent in 2024. The recent high prices caused North American offshore exports to drop. A significant reason for this is that exports to China are expected to continue falling in 2022-23. Sanctions imposed on Russia following its invasion of Ukraine will push more Russian lumber to China, decreasing demand for North American-produced lumber. China also imposed new quarantine restrictions on imports of pine lumber from North America, which has dramatically increased the cost of shipping southern yellow pine and SPF lumber there.

We use cookies on our website to give you the most relevant experience by remembering your preferences and repeat visits. By clicking “Accept All”, you consent to the use of ALL the cookies. However, you may visit "Cookie Settings" to provide a controlled consent.
Cookie SettingsAccept All
Manage consent

This website uses cookies to improve your experience while you navigate through the website. Out of these, the cookies that are categorized as necessary are stored on your browser as they are essential for the working of basic functionalities of the website. We also use third-party cookies that help us analyze and understand how you use this website. These cookies will be stored in your browser only with your consent. You also have the option to opt-out of these cookies. But opting out of some of these cookies may affect your browsing experience.
Necessary Always Enabled
Necessary cookies are absolutely essential for the website to function properly. These cookies ensure basic functionalities and security features of the website, anonymously.
Functional
Functional cookies help to perform certain functionalities like sharing the content of the website on social media platforms, collect feedbacks, and other third-party features.
Performance
Performance cookies are used to understand and analyze the key performance indexes of the website which helps in delivering a better user experience for the visitors.
Analytics
Analytical cookies are used to understand how visitors interact with the website. These cookies help provide information on metrics the number of visitors, bounce rate, traffic source, etc.
Advertisement
Advertisement cookies are used to provide visitors with relevant ads and marketing campaigns. These cookies track visitors across websites and collect information to provide customized ads.
Others
Other uncategorized cookies are those that are being analyzed and have not been classified into a category as yet.
SAVE & ACCEPT